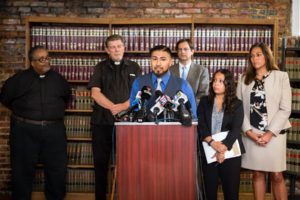 When he was 19 years old, Luis was arrested – and quickly released – for having an unopened can of beer in his parked car in what CPD deemed “gang territory”. Because of this, CPD entered him into the Gang Database. CPD provided this information to ICE, which then targeted Luis during a gang suppression mission, detained him for six months and placed him in deportation proceedings. His inclusion in the Gang Database now makes him ineligible for immigration relief.

The MacArthur Justice Center represented Mr. Pedrote-Salinas in a federal civil rights lawsuit targeting the Chicago Police Department’s policy and practice of falsely labeling young men of color as gang members and then sharing that information with U.S. Immigration and Enforcement (ICE). The federal court dismissed his case. He is currently a named Plaintiff in a federal class action lawsuit targeting the CPD’s Gang Database.

CPD called me a gang member and told ICE I was gang member only because of where I live and the color of my skin. CPD is causing me to lose the only life I know and to leave my family and my community. I am filing this lawsuit to hold CPD accountable for its racist ways and to remove me from the gang database —Luis Pedrote-Salinas