Corey Williams was wrongfully convicted of first-degree murder as an intellectually disabled 16-year old child, and spent 20 years in Louisiana prison for a crime that he did not commit. We represented Mr. Williams in a petition for certiorari before the U.S. Supreme Court and obtained his immediate release from prison through a settlement with the State of Louisiana. 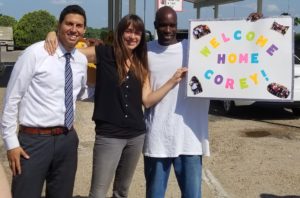 Mr. Williams’ conviction was one of the greatest miscarriages of justice. In January of 1998, Mr. Williams was an intellectually disabled 16-year-old child. He had an IQ of 68, he still sucked his thumb, and regularly ate dirt and paper. A psychologist who examined Mr. Williams stated that, as a child, Mr. Williams suffered “the most extreme case of lead poisoning that I have ever seen.”  Mr. Williams was known throughout his community as a “duck” or a “chump,” someone who would take the blame for things he did not do.

On March 2, 2018, the MacArthur Justice Center, in partnership with the Promise of Justice Initiative, filed a petition in the U.S. Supreme Court urging that the conduct of Caddo Parish prosecutors was a blatant violation of Mr. Williams rights under the Due Process Clause of the U.S. Constitution.  In response to MJC’s filing, the Caddo Parish District Attorney’s Office abandoned its defense of this tragedy and finally agreed to send Mr. Williams home.