Give me the golden door! 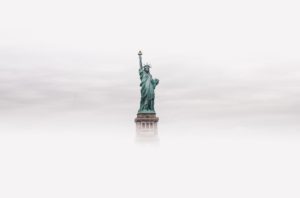 On Friday, February 21, the Supreme Court, by a predictable 5-4 vote, permitted the Department of Homeland Security to refuse entry to noncitizens who are “likely at any time to become a public charge” by utilizing SNAP, Medicaid, or other public assistance. See Wolf v. Cook Cty., Ill., No. 19A905, 2020 WL858799 (U.S. Feb. 21, 2020). Justice Sonia Sotomayor dissented, castigating the government for “follow[ing] a now-familiar pattern” of repeatedly “seek[ing] emergency relief from this Court, asking it to grant a stay where two lower courts have not.” Sotomayor then criticized her conservative colleagues’ acquiescence to the Trump administration, writing, “Perhaps most troublingly, the Court’s recent behavior on stay applications has benefited one litigant over all others.”

President Donald Trump reacted to Sotomayor’s statement, tweeting, “Sotomayor accuses GOP appointed Justices of being biased in favor of Trump. . . . This is a terrible thing to say. Trying to ‘shame’ some into voting her way? She never criticized Justice Ginsberg [sic] when she called me a ‘faker.’ Both should recuse themselves.”

“Sotomayor accuses GOP appointed Justices of being biased in favor of Trump.” @IngrahamAngle @FoxNews This is a terrible thing to say. Trying to “shame” some into voting her way? She never criticized Justice Ginsberg when she called me a “faker”. Both should recuse themselves..

Later, at a news conference in New Delhi, Trump paused from fawning over the genocidal Prime Minister to add: “I just don’t know how they cannot recuse themselves for anything Trump or Trump related.”

This is hardly the first time Trump has bullied the judiciary on matters dear to his heart. In June 2016, then-Candidate Trump demanded Judge Gonzalo Curiel to recuse himself from a Trump University class action due to his Mexican heritage. The following month, he called on Justice Ruth Bader Ginsburg to “resign!”, following critical remarks she made to The New York Times. In early 2017, now-President Trump called Judge James Robart a “so-called judge” after he blocked the Travel Ban. In November 2018, Trump complained about Judge Jon Tigar who had ordered the administration to resume processing asylum claims, calling him “an Obama judge.” Despite displeased comments from Justice Neil Gorsuch and a statement defending the judiciary from Chief Justice John Roberts, the President persisted. As recently as this month, Trump attacked Judge Amy Berman Jackson as she prepared to sentence his friend and alleged co-conspirator Roger Stone.

Yet his latest attack on Ginsburg and Sotomayor stands apart from his previous assaults on the judiciary. One of the few institutional breaches Trump has not committed is defying a court order. As Quinta Jurecic and Benjamin Wittes asked in The Atlantic in March 2018, “At what point does a bad president doing bad things become a problem of constitutional magnitude, let alone a crisis of constitutional magnitude? . . . [W]hen nobody appears to be defying court orders or challenging the authority of the country’s rule-of-law institutions . . . [w]hat exactly is the crisis here?” Following his impeachment acquittal by the Senate, the President has challenged “rule-of-law institutions” by retaliating against those who testified before the impeachment hearings and intervening in the prosecution of Stone, leading to a so-called “Tuesday Night Massacre.” In calling on members of the Supreme Court to recuse themselves, Trump now sets the stage to violate Jurecic and Wittes’s other alarm bell—defying a court order. The crisis, we fear, has arrived.

Ginsburg and Sotomayor should not—and will not—recuse, and surely even Trump understands this. So, one must wonder why he issued this statement at all. Among the more terrifying possibilities is that Trump is embarking on a quest to delegitimize the Supreme Court in order to numb the public, like gradually-boiling frogs, to future executive defiance.

While such executive defiance would not be unprecedented, it would recall dark chapters of American history.

In Worcester v. Georgia, 31 U.S. 515, 520 (1832), Chief Justice John Marshall held that Georgia’s attempts to seize land from the Cherokees violated federal law. President Andrew Jackson quipped in response, “The decision of the Supreme Court has fell still born, and they find that it cannot coerce Georgia to yield to its mandate.” Marshall could not, of course, enforce that ruling. Emboldened, Jackson later used the Worcester decision to strongarm the Cherokees into removal to present-day Oklahoma, leading to an estimated 4,000 Cherokee deaths along the Trail of Tears. Roughly 30 years later, at the dawn of the Civil War, President Abraham Lincoln suspended the writ of habeas corpus, leading to the arrest of a Maryland farmer. When Chief Justice Roger Taney subsequently held the suspension invalid and issued a habeas order, the military refused to comply. Ex Parte Merryman, 17 F Ca. 144 (C.C.D. Md. 1861).  Lincoln justified his actions by asking, “Are all the laws but one to go unexecuted, and the Government itself go to pieces lest that one be violated?” Taney conceded that he had “exercised all the power which the Constitution and laws confer on me, but that power has been resisted by a force too strong for me to overcome.” The farmer remained under indictment until after the war.

In attacking Ginsburg and Sotomayor, Trump undermines the legitimacy of the Supreme Court, setting the stage for a constitutional showdown between the Executive and Judiciary. As Trump’s predecessors Jackson and Lincoln have shown, when the might of the Executive meets the right of the Judiciary, the Court is often “resisted by a force too strong for [it] to overcome.”

And Trump’s defiance may presage the darkest chapter yet. An aspiring authoritarian, loyal only to kin and oligarchs, would effectively become an autocrat without the checks and balances that preserve, protect, and defend our constitutional order.